Several years ago I taught at an affluent school in a suburban community. After years of working in impoverished inner-city schools, the campus culture of privilege and abundance initially shocked my system. Over time I came to appreciate the dedication of the teachers and the high expectations of the parents. Competition reigned supreme at this educational institution, and all stakeholders demanded high impact instruction.


One of my favorite memories of the school year involved Texan Town Clubs on Friday afternoons. During the second semester I hosted a group committed to learning American Sign Language. About ten to twelve students came to my classroom each week to practice signing the lyrics to the popular song, Waiting on the World to Change by John Mayer. We performed at the spirit rally near the end of the year, and the students beamed with pride as the whole school cheered, celebrating diversity and the cultural differences between a deaf and hearing world.

These memories came flooding back to me this afternoon as I watched a DVR episode of ABC Family’s, Switched At Birth. The network filmed the entire show in silence, and I experienced for an hour what it might be like to live as a hard-of-hearing person. The story-line revolved around a group of deaf students who launched a campaign to save their high school. They staged a rally and took over the school, chanting “Occupy Carlton! Occupy Carlton!” with expressive hand gestures and pumping fists. As the show ended, sirens could be heard in the distance.

When I clicked off the T.V., I found myself thinking about my recent professional development experience at the Teacher’s College in NYC. During the Reading & Writing Project, my colleagues and I became researchers and historians. We studied the Civil Right Movement, and we engaged in deep, reflective thinking about big ideas like injustice, equality, and revolution. Our teacher reminded us social studies without action is voyeurism, and on the last day we participated in a class-wide discussion about whether or not the world has changed since the inflammatory events of the 1960’s. We collectively agreed our schools were still segregated, not by race, but by economics. The social divide between the “haves” and the “have-nots” is as wide as it’s ever been, and as educators it’s our job to empower the next generation to tackle these burgeoning societal issues.

Minutes before our last session dismissed, a fellow classmate mentioned the risk involved in taking a stand against deeply ingrained habits of institutions. He posed a provocative question about teachers’ involvement in the current political movements related to educational reform and standardized testing. I sat there wondering why we weren’t doing more to bring awareness to the issues facing classroom teachers across the nation, and visions of sit-ins, marches, and walk-outs emerged. The seeds of revolution were planted, and something deep in my spirit tells me we must take action.

I've read about the Opt Out movement sweeping the country, and I visited the website. After spending the last two weeks dissecting benchmark data and warning students about the repercussion of failure, I’m done. It’s time to stand up and demand change. We can no longer sit by and tolerate a broken system which tells us to customize teaching but standardize testing. Courage, sacrifice, and risk will all be part of the movement, but if 50 years from now kids are no longer tortured by asinine high-stakes testing, we will have made a difference. When revolution broke out in Egypt several years ago, they called it the Arab Spring. I hope in Texas this year we’ll experience a spring full of engaged, authentic learning experiences and radical changes to the current system. 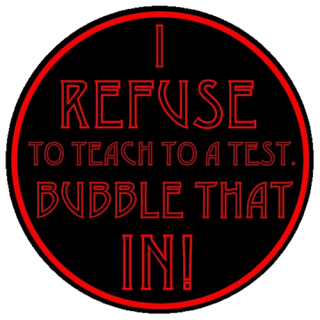 Posted by Thinking Made Visible at 1:05 PM

Brown Girl Dreaming
by Jacqueline Woodson
I'd seen all the hype about this book on Twitter throughout the summer, and I regret not getting a copy sooner. Perhaps books find us at just the right time. I could not have asked for a better ice-day companion. Jacqueline's writing is ...

The Right Word: Roget and His Thesaurus
by Jennifer Fisher Bryant
Delightful biography. Excited to share this with my students.
tagged: picture-books

Fish In A Tree
by Lynda Mullaly Hunt
I just finished Fish In A Tree, and all I can say is WOW! Ally, Keisha, and Albert are the most lovable characters, and I aspire to be a Mr. Daniels for the students I serve. A must-read for all educators. This one better win an award in...
tagged: children-s-literature

I'll Give You the Sun
by Jandy Nelson
tagged: abandoned

The Red Pencil
by Andrea Davis Pinkney
This heartbreaking story brought light to an issue I'd never heard of, genocide in Darfur. Trauma like Amira endures is unthinkable, and her battle with selective mutism makes perfect sense. It's difficult for me to imagine a world where...